Although this is true for the astronomical event, astrologically speaking, the symbolic conjunctions between Venus and the Sun are by no means rare events.  Nevertheless it might be of interest to take the opportunity and have a look at this particular conjunction.

The exact astrological conjunction will take place on the 6th of June 2012 at 01:01 AM. The chart below, cast for London, shows the event. 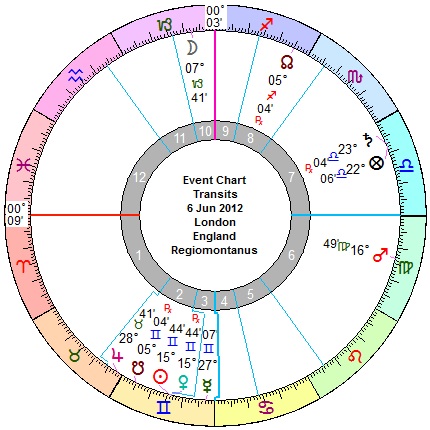 The conjunction is placed in 15*44 Gemini; Sun and Venus are in a separating square to Mars and an applying trine to Saturn. With the greater and the lesser malefic involved, it may be expected that this event will be of some significance.

Let us now have a closer look at Venus. What immediately springs to mind is the fact that she is retrograde. To understand the significance of this, we may have a look at what traditional astrologers have to say about it.

Abu Ma’shar informs us in his Abbreviation of the Introduction to Astrology in the chapter on The Impotence of the Stars:

“…  but the worst [is] the retrogradation of Venus and Mercury, particularly if they are hidden by the Sun; or [planets are] found [under the rays of the Sun or] in dark degrees.” (Dykes, Introductions to Traditional Astrology, p220).

This immediately cuts to the heart of the matter of our investigation about Venus conjunct Sun. When applying to the conjunct with the Sun, Venus will not only be retrograde, she will as well be under the sunbeams and later on combust. That is exactly the worst-case scenario, highlighted by Abu Ma’shar in the quote above.

To understand what this means, we have to look at the definitions of these two terms.

William Lilly informs us in his Christian Astrology, that an unafflicted Venus is

“the lesser Fortune and the author of Mirth and Jollity“ (CA, p73).

But Venus will be very much afflicted on June 5th/6th. We have established so far that she will be retrograde, under the sunbeams and later on, closer to perfecting the conjunction, combust. Apart from that she will be aspecting Saturn and Mars, the greater and lesser malefic.

If we put all this information together, we come to the following conclusion.

Due to her debilitated state during the conjunction to the Sun, Venus will not affect us in a positive, gentle and loving manner but she will rather test some of us to a high degree. We can expect that old relationships may come back to light and old lovers could reappear.  Past events may haunt some people and much resentment may bubble up to the surface. Domestic conflicts should be expected when old structures and patterns are broken up to be rearranged.

It is likely that people who have Gemini rising in their nativity or have their natal Sun or Venus at or around 15* Gemini will strongly feel the effects of this conjunction.

The only time when the negative influence of the Sun will be turned into a positive one is the time Venus spends in the heart of the Sun, otherwise known as cazimi. This beneficial span of time will be on 5 June between 20:52UT and 05:25UT.