On 28 November 2012, there will be a penumbral lunar eclipse. This eclipse belongs to Saros series nr. 145, which was born on 11 August 1832. The graphic below shows the visibility of the lunar eclipse (via Wikimedia*)

The chart below, cast for Budapest, shows the event. 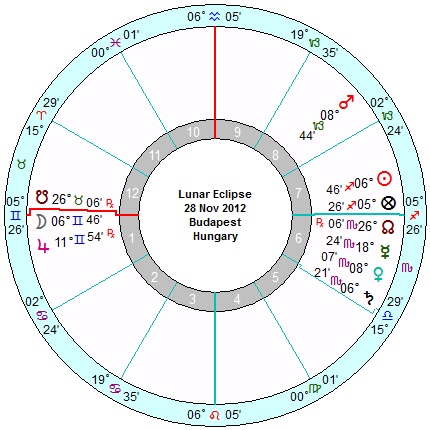 William Lilly tells us in his pamphlet on the judgment of the effects of solar and lunar eclipses:

“For when the place Eclipsed, or Eclipse itself, shall be in the Ascendant, the effects shall then begin in the 1, 2, 3, and 4. moneth next after the appearance of the Eclips, …”

To find out about the possible effects of this eclipse, we can turn to William Lilly again. He writes in his Annus Tenebrosus, or The Dark Year about a lunar eclipse with the Moon in the first Face of Gemini:

“it threatens Incursions and Rapines of enemies: fraudulent Negotiations, many Treatyes, violent Petitions, many Missives, and much employment of  Scribes and Secretaries.”

A look at the map, showing the eclipse’s path of angularity, reveals that the Moon is close to the Ascendant during the eclipse in the centre of Europe, particularly in parts of Poland, but as well Hungary, Rumania and Turkey. Immediate effects of the eclipse can be expected in these parts of the world.

Jupiter is conjunct Moon and ruler of the first Face of Gemini and is therefore of major importance, playing a key role at the time of the lunar eclipse. The map shows that his line of angularity leads through Syria, Jordan and Saudi Arabia, suggesting immediate effects of the lunar eclipse there as well. Jupiter will be retrograde, peregrine and essentially debilitated by detriment. In its debilitated state, Jupiter can represent fraudulent actions, ignorance and carelessness, but also hypercritical religiosity.

From the eclipse chart above, we can see that the Moon in Gemini is conjunct a cluster of stars, the Hyades. These are called “rainy stars”. They are thought to be the nymphs who wept over their brother Hyas, killed by a boar. The Hyades are associated with licentiousness, greediness and the lust for power. Diana Rosenberg writes in her Secrets of the Ancient Skies** that

She also says that these stars are

“ not usually conductive to negotiations” (ibid),

which brings us back to William Lilly’s point.

The Moon’s south node, also known as Cauda Draconis, will be conjunct fixed star Algol, the Demon Star. Lilly says about the effect of Cauda Draconis:

“For the Tayle of the Dragon, I always in my practise found when he was joyned with the evil Planets; their malice or the evil intended thereby was doubled and trebled, or extreamly augmented, &c.”  (CA p83)

Algol marks Medusa’s severed head and has a reputation for violence and extreme danger. According to Diana Rosenberg, Manly Palmer Hall called Algol

For readers, interested in the personal implications of this eclipse, it might be of interest what William Lilly has to say:

“… who had in the Radix of his Nativity either the Sun or the Moon in that degree, or in the degree opposite … or in the like degrees … which signs are in Quadrate aspects to the former, or if the degree Culminating in any man’s Nativity was either [the degree of the eclipse or its opposite or square] or within one degree therof, the native did suffer more or less by the influence of this Eclips; according to the signification of the House of Heaven, wherein the Sun or the Moon was in at the Birth, and was either well fortified or aspected of the benevolent Planets, or ill aspected, or afflicted of the Malevolents.”

For this particular lunar eclipse that means that people with Gemini rising, either in their birth chart or in their Solar return chart for 2012, will feel the influence stronger than others. Furthermore it should be noted if natal Sun or Moon are conjunct the eclipse point. If it should be the case that one or even more of these factors apply, an in-depth reading of the native’s charts may be necessary to find out which particular areas of life  are likely to be affected the most.

UPDATE: An extreme example of the effect the 1648 lunar eclipse had on a king, see my blog post:

Of Beheadings, Fixed Stars and Eclipses