In only a few weeks’ time another lunar eclipse will be upon us. This time the Moon’s south node will be conjunct the fixed star Algol, renowned for its connection with sudden violence and danger, hinting at the fact that not everything might turn out to be as rosy as we would like it to be. To pick up the theme and provide the gentle reader with a graphic example of an eclipse’s predictive powers, I have chosen to delve deep into the occurrences happening in London, back in 1648, the year before the extraordinary execution of King Charles I took place.

Due to the recent publication of the excellent book The King’s Revenge, by Don Jordan and Michael Walsh, telling the story of King Charles II and his hunt for the regicides responsible for the death of his father, this might be a timely addition. 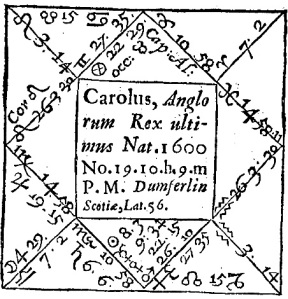 The picture above shows the birth chart of King Charles I, as given by the astrologer William Lilly in his Angelicus Merlin in 1652. Lilly also mentions elsewhere that the king

“[h]ad the Sun in his Radix with Cor Scorpii, and he laboured these two yeeres last past under the Medium Coeli to the conjunction of Mars.”

Without going into too much detail about the king’s nativity, I only want to highlight that his natal Libra Moon is conjunct fixed star Vindemiatrix, regarded by the ancients as unfortunate and associated with deception and disgrace.

The picture below shows the nativity in a form most of us are more accustomed to. 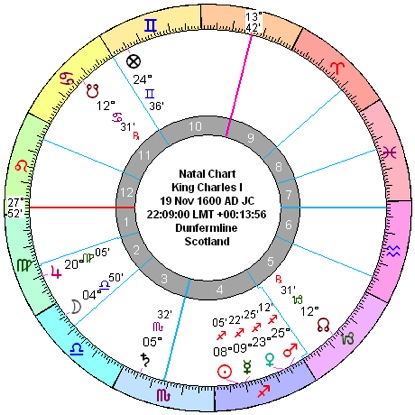 Looking at the important November 1648 lunar eclipse, we find that eclipse Jupiter is also conjunct fixed star Vindemiatrix. According to the Arab astrologer al-Biruni, Jupiter is the natural significator of kings, which seems to be fitting. 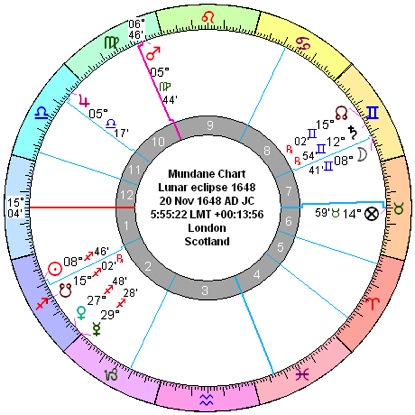 The November 1648 lunar eclipse took place only hours after the 48th birthday of King Charles I ; we can see that the eclipse Sun is nearly exactly conjunct the king’s Sun. This means of course as well that the eclipsed Moon is precisely opposing the king’s Sun. Furthermore, the eclipsed Moon is in King Charles I natal 10th house, which signifies kings in general. We have seen that the king’s natal Moon was conjunct Vindemiatrix and now we find that eclipse chart Jupiter, significator  of royalty, is once again conjunct fixed star Vindemiatrix, promising deception and disgrace to the king. To top it all, the Moon’s north node is conjunct the fixed star Bellatrix. According to Diana Rosenberg’s Secrets of the Ancient Skies, there seems to be a well known connection of this fixed star with imprisonments, assassinations, fanaticism and intolerance.

Recounting the factors, influencing the extreme event that happened so soon after the king’s 48th birthday, we find:

The natal Sun, opposed by the eclipsed Moon is located in the 4th house, darkening the king’s life force and casting a shadow over his ancestral home. We know that only less than 2 months later, on 30th January 1649, King Charles I was executed in front of the Banqueting House which Inigo Jones had built for him. 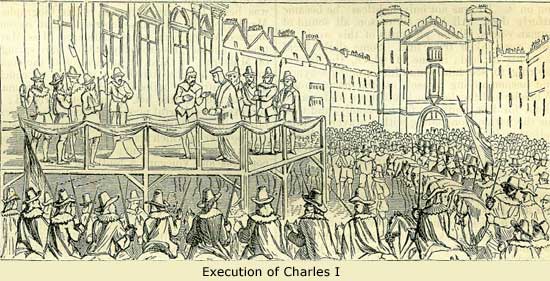 For an analysis of the November 2012 lunar eclipse, see my web log entry:

2 thoughts on “Of Beheadings, Fixed Stars and Eclipses”