The eclipse will be visually imperceptible due to the small entry into the penumbral shadow.

The chart below, cast for the location of Dublin, shows the event: 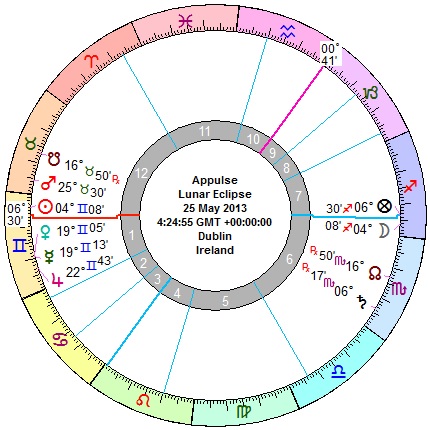 William Lilly tells us in his pamphlet on the judgment of the effects of solar and lunar eclipses:

“For when the place Eclipsed, or Eclipse itself, shall be in the Ascendant, the effects shall then begin in the 1, 2, 3, and 4. moneth next after the appearance of the Eclips, …”

To find out about the possible effects of this eclipse, we can turn to William Lilly again. He writes in his Annus Tenebrosus, or The Dark Year about a lunar eclipse with the Moon in the first Decanate of Sagittarius, ruled by Jupiter:

“It threatens Incursions and Rapines of Enemies: fraudulent Negotiations, many Treatyes, violent Petitions, many Missivs, and much employment for Scribes and Secretaries.”

Jupiter is in his detriment in Gemini, which symbolises fraudulent actions, rudeness, carelessness and ignorance. He is conjunct Mercury, ruler of Gemini. Mercury is the trickster, adding his weight to any of the planets he is closely connected with. In this case he may symbolise a plethora of negotiations and treaties, just as suggested by Lilly.

On the mundane level, this eclipse should be of immediate effect throughout parts of Canada, as can be seen from the world map below. The line of angularity also shows that the eclipsed Moon will be on the Descendant throughout Ireland, France, Libya and other parts of Africa. In these places the effects of the lunar eclipse will be noticeable  by the end of this year, lasting into 2014.

For readers, interested in the personal implications of this eclipse, it might be of interest what William Lilly has to say:

“… who had in the Radix of his Nativity either the Sun or the Moon in that degree, or in the degree opposite … or in the like degrees … which signs are in Quadrate aspects to the former, or if the degree Culminating in any man’s Nativity was either [the degree of the eclipse or its opposite or square] or within one degree therof, the native did suffer more or less by the influence of this Eclips; according to the signification of the House of Heaven, wherein the Sun or the Moon was in at the Birth, and was either well fortified or aspected of the benevolent Planets, or ill aspected, or afflicted of the Malevolents.”

For this particular lunar eclipse that means that people with Sagittarius or Gemini  rising, either in their birth chart or in their Solar Return chart for 2013, will feel the influence stronger than others. Furthermore it should be noted if natal Sun or Moon are conjunct the eclipse point. If it should be the case that one or even more of these factors apply, an in-depth reading of the native’s charts may be necessary to find out which particular areas of life are likely to be affected the most.