Athansius Kircher was a Jesuit scholar who lived between 1602 and 1680. He was born in Germany and lived there and in France, until in 1633 the Austrian Emperor called him to Vienna to succeed Kepler as mathematician of the Habsburg court. On the way there Kircher’s ship was blown off course and he ended up in Rome, where he spent the rest of his life. He published 40 books on various subjects in the fields of Egyptology, geology and medicine. Although he was a contemporary of Rene Descartes, whose rationalism was beginning to  change the world for ever, Kircher’s thinking was still rooted in the Renaissance and particularly in Ficinian Neoplatonism. In his works he extensively quotes from Ficino’s translation of the Corpus Hermeticum, the Pimander and the Asclepius. He even gives his own version of Dee’s Monas Hieroglyphica in his Obe eliscus Pamphilius, published in 1650. Although a Jesuit, Kircher was involved in natural magic; he rejected daemonic magic, but was a Cabalist, trying to establish a synthesis between Hermetism and Cabalism in the sense of Pico della Mirandola.

What is of interest in the context of celestial spheres (see as well my web log entry On the Nine Spheres of Heaven) is a plate of comparative pictures of different cosmological systems. The plate reproduced here was first published by Kircher in his Iter Extaticum, Rome 1671. A pdf version of this book can be accessed here: Iter Extaticum 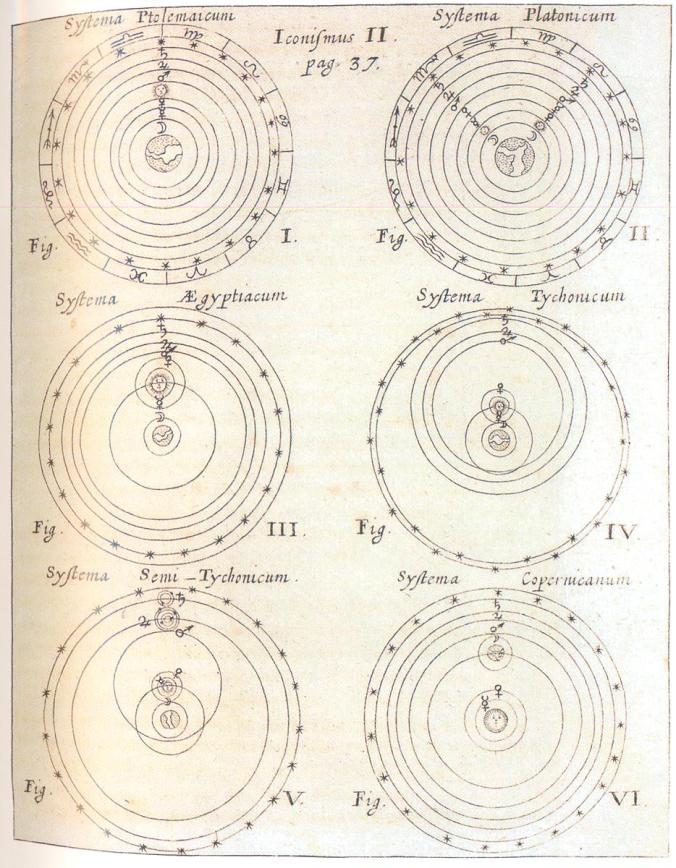 I. The Ptolemaic system

This is the basic system with the earth at its centre; the seven spheres of the Planets (moon, Mercury, Venus, sun, Mars, Jupiter, Saturn) surround the earth. They are all moving in concentric circles. Above the sphere of Saturn are placed the spheres of the fixed stars and the zodiac. This model was in use until it was overturned by the Copernican revolution.

For Plato the cosmos was principally the image of the cosmic soul, mixed together from the three ingredients, being, sameness and difference, each of which is an intermediate state between the indivisibility of the noetic world and the divisibility of perceptible phenomena. It was structured by the demiurge, who indicated time by placing circular moving heavenly bodies in the circuits of the cosmic soul. For an in-depth discussion of this subject see Plato’s Timaeus, 34b-36b. Note hat Plato puts the sun directly above the moon.

This system was adopted by Vitruvius who lived between ca 80 – 70 BC and 15 BC. He was a Roman writer and architect who was rediscovered in the Renaissance. Here Mercury and Venus are revolving around the sun. Like the other Planets, the sun revolves around the earth.

This system was suggested by Tycho Brahe, who lived between 1546 and 1601, was a famous astronomer and alchemist. He tried to combine the Copernican system with the Ptolemaic system, the so-called Tychonic system. In his system there are two centres; the sun revolves around the earth and is at the same time the centre of the five other planets.

In 1543 Nicolaus Copernicus, the famous Renaissance astronomer, formulated his heliocentric cosmology. His book De Revolutionibus Orbium Coelestium can be regarded as the first textbook of modern astronomy. Having put the sun in the centre of the celestial spheres, he showed that his system corresponded with the Hermetic idea of the refinement of matter from lead (Saturn) towards gold (Sun), represented by the innermost, central position of the sun. Nevertheless Copernicus’ discovery was predated by the vision of Nicholas of Cusa, a German bishop, who lived between 1404 and 1461. Cusa was a Neoplatonist who reached the conclusion that the earth, rotating on its own axis, was circling the sun already in 1445. Nicolaus Copernicus, Giordano Bruno, Johnnes Kepler and Galileo Galilei were all aware of Cusa’s writings. Giordano Bruno often quoted Cusa in stating that “because God was infinite the universe would reflect this fact in boundless immensity”.

Five windows light the cavern’d Man; thro’ one he breathes the air;
Thro’ one, hears music of the spheres; thro’ one, the eternal vine
Flourishes, that he may recieve the grapes; thro’ one can look.
And see small portions of the eternal world that ever groweth;
Thro’ one, himself pass out what time he please, but he will not;
For stolen joys are sweet, & bread eaten in secret pleasant.
(W. Blake, Europe A Prophecy)

Light plays a crucial role in Traditional astrology. And here I am not only thinking of light emanating from the sun, making the seven planets of Traditional astrology visible to the naked eye. First and foremost I am talking about the light of creation, or divine light, of which our sunlight may be seen as an important but distant relative. Light has long been recognised as a most important factor in many cosmologies and creation myths.

One typical example is the Lightning Flash of Creation depicted on the Tree of Life:

Here the divine light emanates from the void beyond Kether to manifest the physical Earth (Malkuth), passing through all the other sephirot on the way. This process of creation has to be seen outside of time and space as it creates time and space itself.

Another cosmological model is the Tetraktys:

John Dee states in his Monas Hieroglyphica, published in 1564:

Besides, the kabbalistic extension of the Quaternary according to the common formula of notation (because we say one, two, three, and four) is an abridged or reduced form of the Decad. This is because Pythagoras was in the habit of saying: 1+2+3+4 make 10.

With this quote, Dee shows his knowledge of Plato’s cosmology and the Tetraktys. The triangle of Ten is nothing else but the depiction of the creation of the universe. The Monad, the point at the top of the triangle, splits into two, implying that creation can only be a division in the first place. Here we see the division of the One into Two, light and darkness, male and female (2). The next step after this scission is addition (1 + 2 = 3) and after this addition the first multiplication (2 x 2 = 4 ) takes place. This process of creation can be expressed as 1+2+3+4 equals 10.

To see how the divine light permeates creation, we can turn again to John Dee and his Monas Hieroglyphica, wherein he states:

As is evident from the sixth theorem, FOUR right angles can be considered to be in our Cross, and the preceding theorem teaches that the sign of the Quinary can be attributed to each one of them, the right angles of course being arranged in one way, but maintaining another position. The same theorem explains the production of the hieroglyphic symbols of the number FIFTY. Thus, it is very clear that the Cross generally denotes the Denary; and that in the order of the Latin alphabet, it is the twenty-first letter (whence it was the case that the wise ones called the Mecubalists signified the number twenty-one with the same letter); and finally, it can be considered very simply to be seen as one sign, no matter what kind of, and how much, other power it has. From all of these things together, we see it can be concluded by means of a very good cabbalistic explanation that our Cross can signify to initiates, in a remarkably shortened way, the number TWO-HUNDRED-FIFTY-TWO. Namely, FOUR times FIVE, FOUR times FIFTY; TEN; TWENTY ONE; and ONE, add up to TWO-HUNDRED-FIFTY-TWO; which number we can deduce in still two other ways from our previous statements. Thus we recommend to cabbalistic Tyrians that they scrutinize this same number, studying it in such a brief space, concluding the varied, skillful production of this Master Number to be worthy of the consideration of philosophers. I will not conceal from you here another memorable initiator to the mysteries. Our Cross having suffered itself to be divided into two different letters, and as earlier we considered their numerical virtue in a certain way, we will now compare in turn their verbal power with that cross, because from this may be born LVX (LIGHT), a Word we perceive with the highest admiration, finally and magisterially through the harmony and agreement of the Ternary in the unity of the word.

Dee clearly shows the all-encompassing importance of the divine light, being manifest in the elements and shining through all the worlds.

Having established the four elements, representing the different combinations of the four qualities, we can have a look at the next level, the zodiac. Here we find our four elements in three different modes. We call them ‘moveable’, ‘fixed’ and ‘mutable’, but other systems may recognise these modes as ‘sattwa’, ‘rajas’ and ‘tamas’, or ‘sal’, ‘mercury’, and ‘sulphur’. This leads us to the 12 signs of the zodiac, which, together with their mundane counterparts, the mundane houses, are the representation of all of creation.

We have seen how the numbers 1, 2, 3, and 4 are symbols of the creation of the world, resulting in the wheel of the zodiac (3 x 4). If we move one step further into the world of manifestation, we find that the number 5 is the number of the planets used in the tradition, except the lights (sun and moon). Together with the sun and the moon, the number of the planets increases to 7 (3 + 4). John Dee shows this perfectly in his Monas Hieroglyph.

Being the source of everything, the monad divides, adds and multiplies in the constant creation of the universe. Although unknowable, it is essentially pure. Only when manifestation takes place, the essence splits into several different parts. This can be compared to light, splitting  into the colours of the rainbow when shining through a prism. We may note here that a prism is of triangular shape, another indicator for the threefold nature of creation.

Our seven planets, being in a more manifest stage on the path of creation, symbolise these seven parts of divine light or essence. As these planets exist on the material plane and therefore change their positions in time and space, the astrologer can find out how well their essential natures are expressed at any given point. This is known as essential dignity or debility.

The illustration here shows the table of essential dignities of the planets published in William Lilly’s Christian Astrology, 1659, 2nd edition.

By assessing the level of essential dignity of each planet, the astrologer tries to establish how much of their essence, or their individual part of the divine light,  is available at a particular moment in time. This information enables the astrologer to give accurate judgment.