The astrological chart, cast for Dakar , also shows the event: 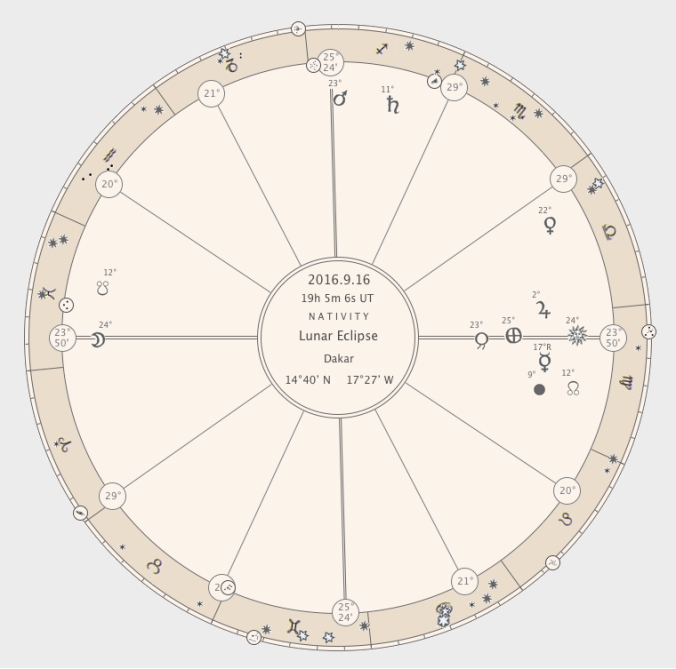 Before we will discuss any possible effects on the individual, we have a look at the mundane astrological implications of this eclipse. To be able to do this, we need to establish where the eclipse is likely to have its greatest effect. For this purpose we need to look at the countries or cities falling under the rulership of Pisces, the sign wherein the eclipse Moon resides during the event. We also have to take into consideration that the eclipse’s visibility will greatly enhance its effect. Looking through traditional source material, we find that Egypt (particularly Alexandria), Italy, with Calabria, Compostella, and Sicily; Spain (particularly Seville), France (Normandy and Rheims), Portugal and Germany (particularly Ratisbone and Worms) are the locations traditionally thought to fall under the rulership of Pisces. The Moon is placed in the last decanate of Pisces, which is ruled by Mars. Therefore we have to look at Jupiter and Mars as eclipse rulers. William Lilly writes in his Annus Tenebrous, that a lunar eclipse in the last decant of Pisces signifies:

“robberies equally committed both at Sea, and on dry Land.”

Lilly says about Jupiter being eclipse ruler, that he would “produce the increase of all things”. Unfortunately at this lunar eclipse, the Sun/Moon axis is tightly squared by Mars in Sagittarius, who is also eclipse-ruler. Lilly writes in no uncertain terms that “hee [Mars] generally is the cause of corruption in regard of his too much dryness, and this especially when he is in a fiery Sign”. Mars is not only in a fiery sign, he is also conjunct Ras Alhague, a fixed star on the head of Ophiuchus, the Snake Charmer. Robson writes about this conjunction that it suggests “Trouble through writings, public censure in connection with religion, science or philosophy”*, and Elsbeth Ebertin writes that “there is danger of insect bites, snake bites or assault from infuriated animals or rabies smitten dogs”**.

On a personal level, an eclipse usually affects only a small number of people. To establish the possibility of any effect to take place, the birth chart should be scrutinized for any of the following:

On 21 September 2012 05:15AM, a comet named ISON was discovered at the ISON-Kislovodsk observatory, Russia. It is believed that ISON may prove to be brighter than a full moon when it is set to appear by the end of 2013.

This is the election chart for the discovery: 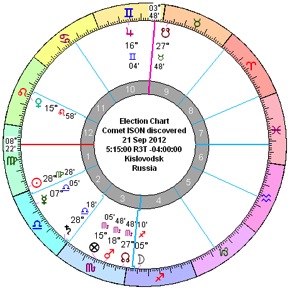 The picture below shows the path of comet ISON with its perihelion in 06*49′ Sagittarius, on 28 November 2013: 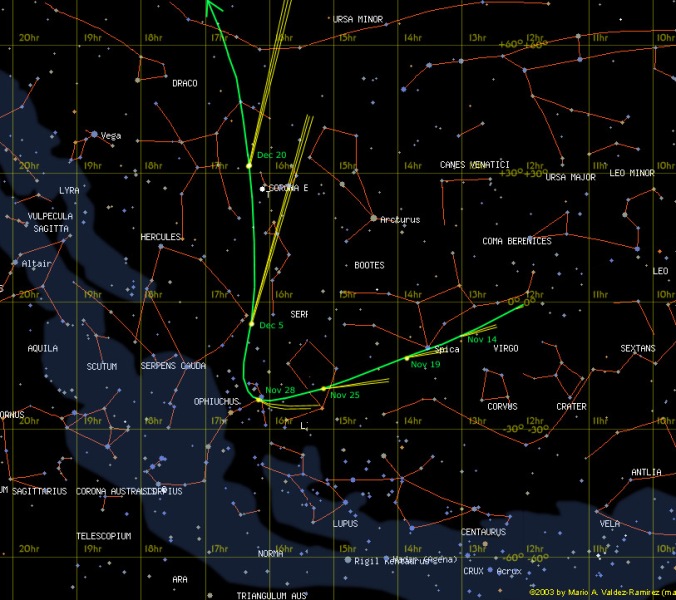 In 1680 William Greene already mentions comets in signs in his Memento to the World, writing about the appearance of a comet in Sagittarius:

“In Sagitary it denotes Evil to Great Men, Controversies about Religion and Laws, Feavers and other dangerous Infirmities”

He also quotes a poem by Guillaume de Salluste Du Bartas from 1578:

“Here in the Night appears a flaming Spire,

There a fierce Dragon folded, all in fire;

Here a bright Comet, there a fiery stream,

With fiery flakes, about the air to bound,

There with long, Bloody Hair, a Blazing Star,

Threatening the World with Famine, Plague and War.

To Princes Death, to Kingdoms many Crosses,

To all Estates inevitable losses,

Around the time of its perihelion, at the end of November 2013, comet ISON will be conjunct the fixed star Dschubba sitting at the head of the constellation Scorpio. Dschubba is believed to be of the nature of Mars and has some of Saturn’s characteristics as well.

This similarity to the greater and lesser malefic suggests that Dschubba is close in nature to comets, which are, as we have seen before, bringer of famine, plague and war.  We can therefore conclude that the conjunction between comet and fixed star will enhance the potential for negative occurrences.

Due to the precession of the equinoxes the constellation of Scorpius overlaps with the tropical zodiac sign of Sagittarius. To be able to try and predict the events symbolized by comet ISON, we have to consider both, the sidereal Scorpius and the tropical Sagittarius to get a clearer picture.

Diana Rosenberg says about the region of Scorpius/Sagittarius in her Secrets of the Ancient Skies, that:

“[t]his is an area of night, the Serpent and the Scorpio, both denizens of dark, hidden places … dominate these longitudes … There is a direct conflict here between expansive, congenial tropical Sagittarius and the dark Scorpion underlying him.” (vol.2, p.272)

Manilius said about Scorpio that it would preside over armaments and makes men’s minds burn with eagerness for war; their hearts rejoice in the flow of blood, for slaughter as much as for acquiring booty.

But then we have to consider as well that there must be a calmer, more enlightened influence, coming from the tropical sign of Sagittarius, ruled by Jupiter, the greater benefic. And, looking at the comet’s path again, we can see that after its perihelion, ISON will move sharply to the north, encountering Ophiuchus, the shaman. He is the mediator between heaven and earth, source of all wisdom and healing. But Ophiuchus is also forever encircled by the Serpent, forever struggling in a fight neither of them can win.

So after all it seems when dealing with the influence and possible effect of comet ISON we are reminded of a sentence from the Tabula Smaragdina:

With the appearance of comet ISON, the eternal struggle of darkness against light is once again played out in the heavens as well as on earth. Will Ophiuchus, the shaman, magician and healer, be successful in his battle against merciless violence, destruction, greed, and over-inflated materialism, and be able to keep the coming events, symbolised by comet ISON, which is so similar to the Serpent he is struggling with eternally, under his control?

As an addendum it should be noted that, according to Manilius and Ptolemy, Scorpio reigns over the eastern North African area, including Syria, Algeria, Morocco, and Libya .

Keep track of comet ISON with the help of the ISON Comet of 2013 Astrology Viewer 1.0:

The Astronomy & Astrology of Comet ISON