In my blog post concerning the upcoming solar eclipse, I wrote that, according to William Lilly, we should expect a natural catastrophe and/or the death of a prominent man. Similar occurrences in history also seem to indicate the possibility of an assassination (see the article, here)

If we cast our minds back to the last solar eclipse that took place on 13 September 2015, we may also remember that it was followed by the shocking Paris terror attacks, on 13 November. In a blog post, published last August, I wrote about the solar eclipse, predicting the likelihood of murder to take place in Paris (see the original article, here). Sadly, this turned out to be true.

If we now take a closer look at the chart of the upcoming solar eclipse, we can see that Mars will be in 01*03 Sagittarius. He will continue to move through Sagittarius, but will be stationary retrograde on 18 April. This means that he will return to 01* 03 Sagittarius, his original position during the solar eclipse, on 24 May 2016. 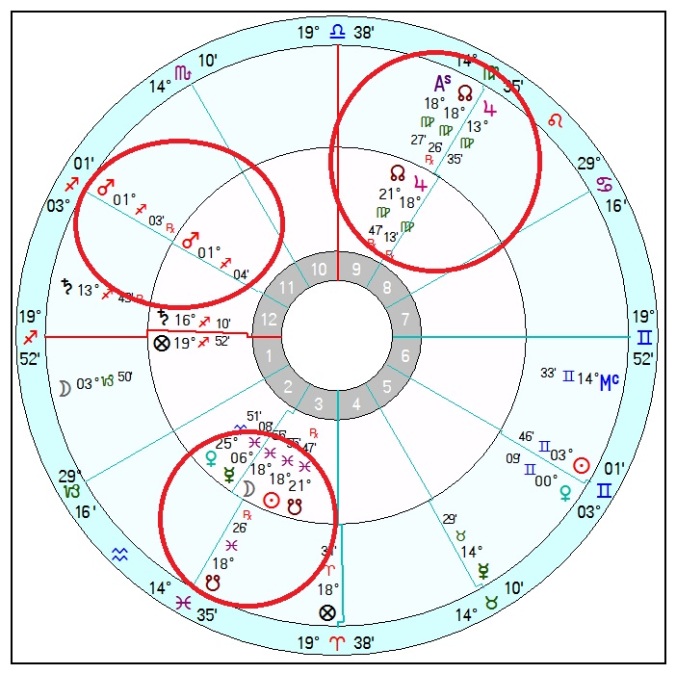 On 9 March 2016, at 1:57UT, there will be a total solar eclipse. The eclipse will be visible in its totality in Indonesia and the Pacific Ocean. The partial phase of the eclipse can be observed in Malaysia, the Philippines, Thailand, the Pacific and Hawaii. This eclipse is one of Saros Series 130. It has a duration of 4 minutes and 9 seconds. The map below shows the visibility of the eclipse (time observed is UT):

The astrological chart, cast for Jakarta , also shows the event:

Before we will discuss any possible effects on the individual, we should have a look at the mundane astrological implications of this eclipse. To be able to do this, we have to establish where the eclipse is likely to have its greatest effect. For this purpose we need to find out which countries or cities fall under the rulership of Pisces, the sign wherein the conjunction between Sun and Moon takes place. We also have to take into consideration that the eclipse’s visibility will greatly enhance its effect.

Looking through traditional source material, we find that  Egypt with Alexandria in particular, Italy, with emphasis on Sicily, Calabria, Spain with Compostela and Seville, Asia Minor (Turkey and Armenia), France, with emphasis on the Normandy and Rheims, Portugal, and Germany, with emphasis on Ratisbone, are the locations that could be most affected by this solar eclipse.

Jupiter is the planet ruling this eclipse. At the time of the eclipse, he will be located in Virgo, where he is in his detriment. He is also retrograde, which adds to his level of debilitation, and he is conjunct the North Lunar Node. The North Lunar Node is conjunct fixed star Denebola. Robson writes that this star ‘gives swift judgment, despair, regrets, public disgrace, misfortune from the elements of nature, and happiness turned to anger’ (*FSC p161). Denebola is also the determinant of the 10th Lunar Mansion, al-Sarfa, indicating a change in the weather. Therefore we can expect storms or extreme barometric lows, and possibly ships getting wrecked as a result.

We also find that that this eclipse, located in the second decanate of Pisces, which is ruled by Jupiter:

“… designs the death of a famous and excellent man, destruction and waste neer the Sea Towns, it imports an Earthquake, some great Church-men questioned, and he called to account for his knavery ”

as William Lilly writes in his Annus Tenebrous. To give only an example how things played out in the past, Diana Rosenberg knew that Jupiter was conjunct Denebola in 1933, when an attempt to assassinate Franklin D. Roosevelt took place (SAS** vol1, p650).

With Jupiter being the sole rulers of this eclipse, we can, according to Lilly, expect to experience good things, like glory, tranquility, fertility and peace. Unfortunately we have already established that Jupiter is in very poor shape, which will undoubtedly turn some of the positive attributes mentioned above into their opposite. There is also the suggestion of a connection to ‘church-men’ and, taking into consideration that Jupiter is natural significator of religion, religious conventions, clergymen, and christian churches in general, the picture of the problems this solar eclipse suggests is manifesting.

On a personal level, this eclipse could indicate that the native may be injured or lose their life in catastrophes connected with severe weather, such as floods or shipwrecks, but they could also be harmed through personal or revenge attacks. After all, we have shown above that the death of an ‘excellent man’ (read ‘person’) can be expected. There is also danger to one’s eyesight.

It is useful to know that the last time a solar eclipse occurred in 19* Pisces was in 1997. Although an eclipse usually affects only a small number of people, it may be beneficial to try and remember if any problems occurred during this year. If so, but also to generally establish the possibility of any effect that could take place, the birth chart should be scrutinized for any of the following:

UPDATE: For additional information about this eclipse, see my blog post: