One of the first principles of astrology is the scission of the Monad into two. (Genesis I or other creation myths may be consulted here for further details). Once this separation has occured, the two parts act as symbolic opposites. Examples for this may be hot and cold, light and dark or day and night.

The fundamental idea of the division of planetary hours is rooted in this way of thinking. Our 24 hour day is split into a dark and a light part. The light part is defined by the length of time between sunrise and sunset and the dark part comprises the hours between sunset and sunrise. For many centuries astrologers have been aware of the fact that the length of day and night is only equal at the equinoxes, whereby its opposite, the longest day and shortest night or vice versa occurs at the solstices.

“It is very true, some of the Ancients have Winter and Summer, made the day and night to consist of equal hours. I mean every hour to consist of sixty minutes, equally; but Astrologians do not so, but follow this method, viz. according to the motion of the Sun both  Summer and Winter, so do they vary their hours in length or shortness;” (CA, p482)

With this quote Lilly gives us an idea, how we should proceed in finding out the length of these unequal hours of day and night for each day. One measures the time between sunrise and sunset and divides it into 12 equal parts. These are the planetary day hours. The same may be done with the night hours, measured from sunset to next day’s sunrise to find out the length of each of the planetary night hours.

“You must understand that as there are seven days of the week, viz. Sunday, Monday, Tuesday, Wednesday, Friday, Saturday, so there are seven Planets, viz. Saturn, Jupiter, Mars, Sol, Venus, Mercury, Luna: We appropriate to each day of the Week a several Planet; as to Sunday, Sun; to Monday, Moon; to Tuesday, Mars; to Wednesday, Mercury; to Thursday, Jupiter; to Friday, Venus; to Saturday, Saturn:” (CA, p482)

The order of Planets Lilly describes is known as the “Chaldean Order”.

This order is important as it shows the relative mean speeds of the Planets, an important factor in horary astrology. As well from a geocentric perspective, which has been traditionally used, it represents the order of the planetary spheres. (For more on planetary spheres see my web log article Athansius Kircher on the Celestial Spheres)

To reiterate and give an example, we want to find the planetary hours of the Moon for Monday, August 23rd 2010. 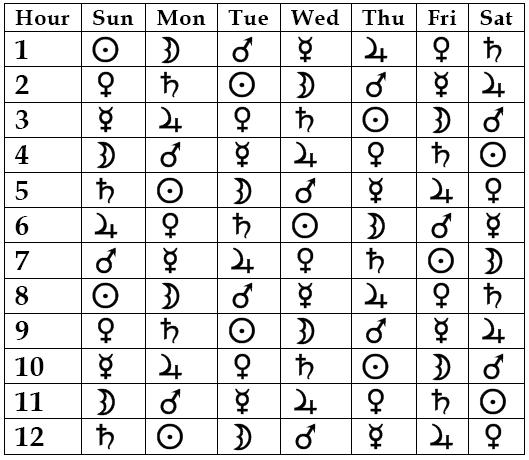 “…] the Question than shall be taken for radical, or fit to be judged, when as the Lord of the hour at the time of proposing the Question, and erecting the Figure, and the Lord of the Ascendant or first House, are of one triplicity, or be one, or of the same nature.” (CA. p121)

But it is not only horary astrology which is dependent on the knowledge of the planetary hour. William Lilly, a true Hermetic practitioner, tells us in his own words:

“Either in giving Physic, or performing many natural conclusions, without exact knowledge of the Astrological planetary hour, no worthy work can be done, with it wonders, either in collecting Herbs, framing Sigils, Images, Lamens, &c.” (CA. p485)